We’re far enough in this project that I feel confident announcing it.  Bloomingnerd Studios is working on it’s first publication.  Super Fun TV Hour! is a sourcebook for adapting Fate Core to play super sentai groups like Power Rangers, Sailor Moon, and Voltron! 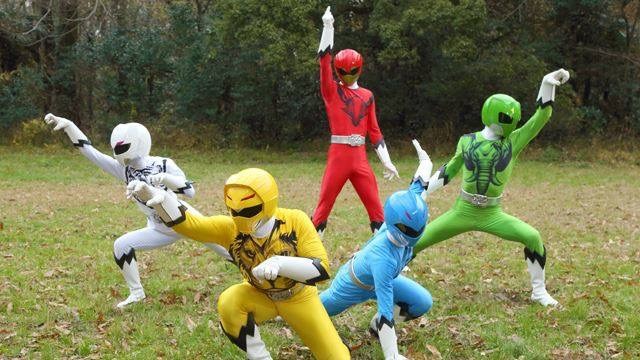 The Team Makes you Special

Super sentai as a genre is imported from Japan, where the ideals of teamwork, and team harmony are held in deep regard. This is represented well in sentai fiction. The thing that makes an individual special is not that they can transform into a super hero, but that they do it as a team. Unlike American super groups like the X-Men or League of Justice, there is homogeny in design and powers of a sentai group.  Often the uniforms are identical, or have small design adjustments, but bold color distinctions.  Their powers are usually less identical, but still follow a theme.  For instance, the Power Rangers and Teenage Mutant Ninja Turtles all use distinct martial arts weaponry.  The Sailor Scouts have different elemental attacks.  The color distinctions tend to guide the differences in powers.  Later, we’ll discuss how these small differences can be used to craft excellent aspects and stunts.

The emphasis of the sentai genre on teamwork is again a magnificent tool for a tabletop RPG.  When the team is more important than the individual, there is less inter-party conflict and splitting the group.  Mechanically, this is especially important if your sentai game involves coming together to create a megamech.  A party can’t fight the mega monster if one of their party is off doing their own thing!

It’s looking like Super Fun TV Hour! will be about 40-50 pages packed with suggestions and examples of playing sentai using Fate!  The text is in final revision now, and art is being commissioned from the indomitable LeaLeeLu!

Expect piles of teasers in the coming weeks.  Our goal is to have the PDF ready for sale on DriveThruRPG by August 4th and in print by December.