Recently, I gave a GM friend advice that she should be able to fit her entire scenario/session notes on a single note card.  I’ve been playing this way for years, trying to boil my preparation down to the bare essentials.  To help enforce my one card game prep methodology, I built a template! 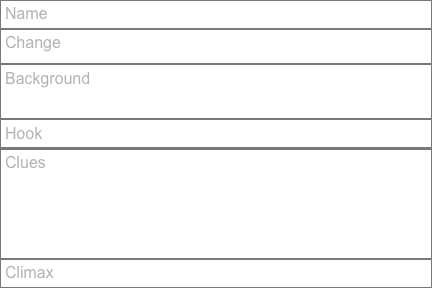 The idea behind this template is that there are five key point that a GM (in my opinion) must have to be prepared for a scenario.  Note that these key points are specific to the Game Master’s perspective.  To the players, as the games is being played, the story unfolds in the typical Introduction, Conflict, Rising Action, Climax, and Resolution format.

Name:  Just a place for the name of your Scenario.  Not critical by any means, but very helpful to have a pithy name to show what can be done.

Change:  From a game prep perspective, I feel this is the most important element.  This should be 1-2 short sentences stating what change will happen to the game world due to the events of this scenario.  Some examples:

Background:  A place for GM seekrits!  This is where you put what’s really going on.  The big things the PCs don’t know at the beginning of the scenario.  I keep this field small because it is super easy to overdo.  Essentially, if it’s more than three sentences, it is overdone.  A couple I’ve used:

Hook:  Much has been written about hooks.  This should be a one sentence summary of what will get the players started towards your Change.  Examples:

Clues:  This does not necessarily mean literal clues like a Scooby Doo mystery, though it could if you are running a mystery solving game.  Clues in this context are things you have prepared to help players get from the Hook to the Climax while participating in your Change.  They should be general reminders of where the PCs can get guidance about their next step.  You could alternatively call these complications, as also enrich the story.  I prefer the word Clues though, as it better delineates the intention of helping the PCs move the story.

Rather than isolating specific scenes, have a list of 2-3 clues.  Here are examples of three clues from a recent Fate game:

In the scenario, the Change is that Azazoth is called into the world.  The Climax is a confrontation with Gabriel at his compound during the summoning ritual.  You can see how each of the clues is designed to entice the players to move towards this climax.

Climax:  Keep this pithy.  The bulk of your writing should be in the Clues.  Nearly all stories have a climax.  In RPGs, this happens during a confrontation.  Just one sentence is enough to remind you.  Something like these:

My goal over the coming weeks to to create a number of these one-card scenarios and post them here for people to use.  I particularly like the constraint of keeping these elements on one card.  It helps me keep things from getting too complex, and thus unwieldy at the table.  My experience has taught me that in role playing games a concise plot, executed well, far outperforms a deeply crafted plot that your players will inevitably throw to the winds.

If you’re interested, here is a PDF form of the above card you can fill out and print!

This entry was posted in Card a Week, Scenario Design and tagged adventure design, Template. Bookmark the permalink.