I must not email.
Email is the mind-killer.
Email is the little-death that brings total obliteration.
I will face my email.
I will permit it to pass over me and through me.
And when it has gone past me I will turn to see emal’s path.
Where the email has gone there will be nothing……Only I will remain.

Posted in Uncategorized | Comments Off on Litany Against Email

Alex and Kelly both ready the 1985 run of Longshot.  Then they talked about it for a while.

This week, Alex and Kelly wax poetic on Terry Dodson’s take on Spider-man.

On the Bench: Nazis

What gaming experience would be complete without having to fight some Nazis? 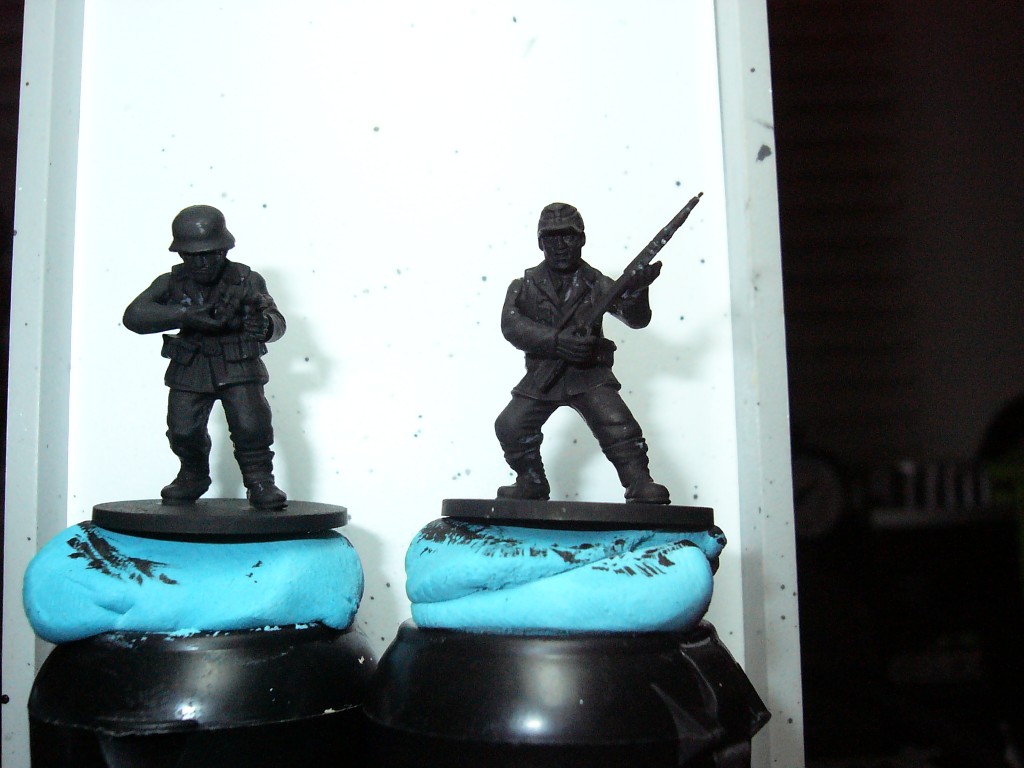 These are from Warlord Games, who convinced me to buy into Bolt Action at Gen Con this year.  I haven’t had a chance to play the game yet, but I do have other uses for tiny nazis coming up.  Muh-ha-ha.

Posted in Uncategorized | Comments Off on On the Bench: Nazis

I finally got most of a day to devote to painting.  I started a few projects… 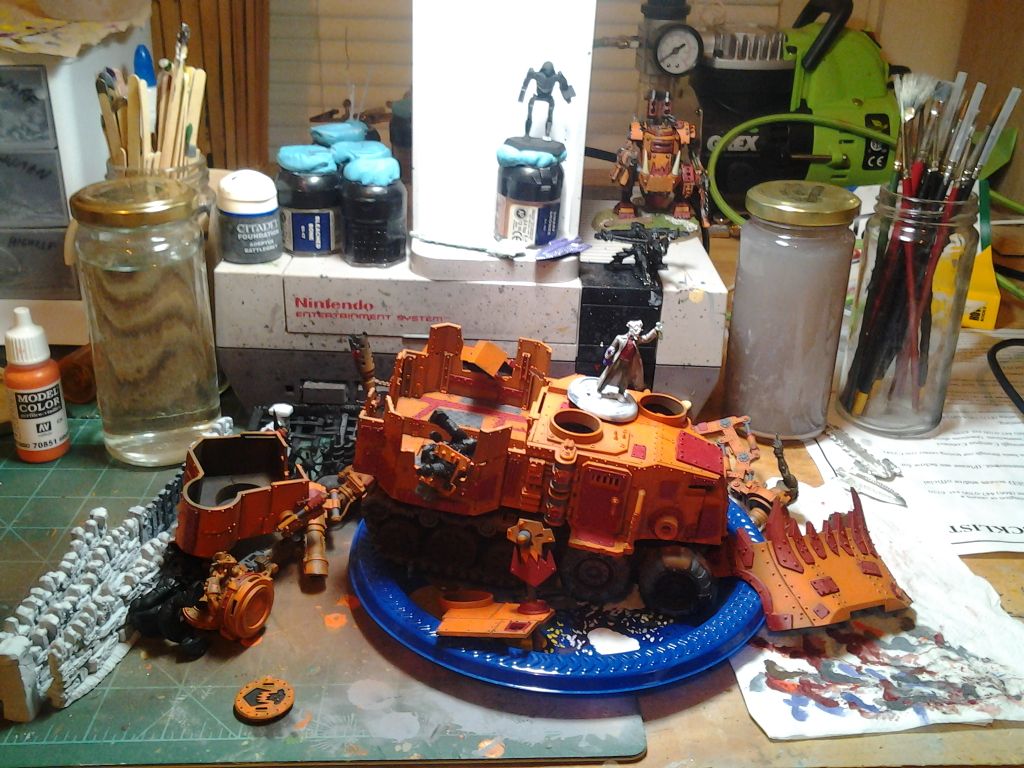 Someday I will finish something.

Posted in Uncategorized | Comments Off on Works In Progress

On the Bench: Killa Kans

I think the most delightful thing about the Ork army is it’s heavy choices.  I so want to do up a car in the Ork style and drive it in a demolition derby while shouting “Waaagh!”

In any case, I’m currently finishing up three Killa Kans. 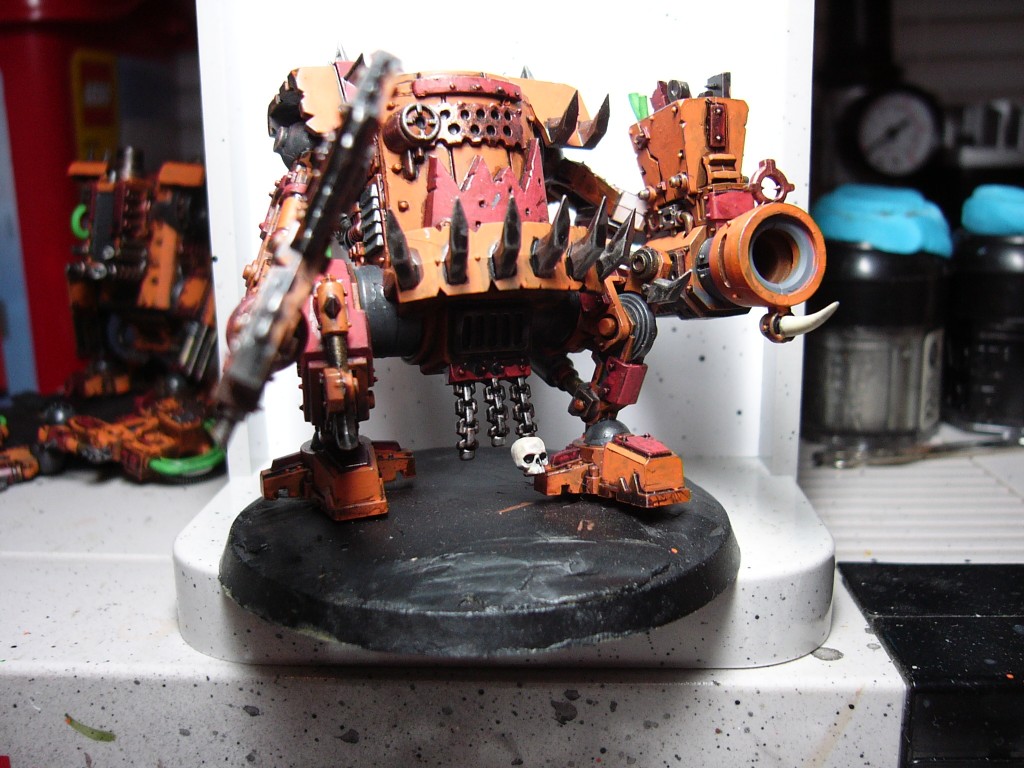 This is also my first attempt at adding battle damage to my models.  You can see it best in the next photo.

You should be able to see along many of the sharp edges, it looks like the paint has been ground off, leaving naked steel underneath.  This effect is done cheaply by running a #2 pencil over the raised surfaces.

Posted in Uncategorized | Comments Off on On the Bench: Killa Kans

In the last two years, I’ve poured a lot of time and money into this wargaming hobby.  Now is a good time to examine the “state of the hobby” and where I want to go from here.

When I started the hobby in earnest, like many people, I jumped in with both feet in a huge rush of zeal.  I started a Warhammer legue at a local game store, built 5 Warhammer armies, started playing Firestorm Armada, Warmachine and Flames of War.  I started making plans to get deeper into historical miniatures from the Napolionic era.  I wanted nothing less than to be completely committed to each and every game that had toys I needed to build and paint.

Then the tide of enthusiasm started to roll back a bit.  I grew uncomfortable at my local game store.  Bad behavior from some my fellow gamers skeezed my out.  I began to feel frustrated at the amount of models and games that I had collected but had no time to work on.  I found myself taking less joy from the hobby and spending most of my time with it just worrying about how I would get everything done.

Still, at no time did I imagine giving it up.  The draw of taking these wonderful games and making them my own is powerful.  What I needed to keep myself sane was to manage my own expectations.   I had to accept what I could do with the time I had.  I hosted games in my home, rather than at a game store, which gave me the ability to control my environment.  I could dictate the people I played with.  After shedding many of the models that I likely would not be able to get to for a number of years, I had a much more manageable looking pile of projects.   Eventually, I found more like-minded people to play with.  A slower, deeper enthusiasm for wargames took shape.

Now, I am wondering how to move forward.  In the coming few years, time is going to be tighter.  I’m starting school again, committing to my career, and working out in earnest.  I won’t be able to casually spend long evenings at the workbench.  Justifying 4-5 hours on a Sunday afternoon to play with toy soldiers is going to be harder to do with schoolwork due or a job calling.

Here are some of my options.

Switch to something smaller.  There are smaller scale “skirmish” games that I’ve 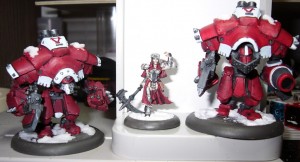 been interested in.  Warmachine and Malifaux are two recognizable names, though I’ve fallen in love with Firestorm Armada, and Hell Dorado has caught my attention.  All of these systems provide a satisfying experience with just a few models.   I can kick out a fully painted force with a month or so of limited bench time.  Then there’s the added benefit that when I ask someone if they want to try this new game, they’re not overwhelmed by mountains of plastic models spread across the table.  Rather than having potential players seeing what looks like an impossibly large project, they can look at a tidy arrangement of pretty models and hopefully say “I could do that”. 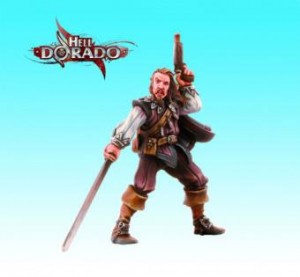 The skirmish games are not without their drawbacks, though.  Getting people interested in games even less recognized than the Games Workshop is an uphill battle.  “Hey, you want to come over and try playing Hell Dorado with me?  It’s a skirmished based miniatures game where you play a Thirty Years’ War era expeditionary force into Hell for fun and profit!”  Hard sell.

Concentrate more of playing, less on building.  This is hard for for me, as the greatest joy of wargaming is the creating.   It would be beneficial for me though.  For all my talk about wargames, I am not very good at playing them.  I am not a great tactician.  I rely on luck and/or brute force to… well, grind out a draw really.  I don’t win all that much.  Perhaps my limited time would be more wisely spent focusing on improving my game play.  Instead of working on new projects, I can work on getting better at using what I have.

Do a few things very well.  Rather than concentrating on a large volume of work, I can focus on putting out only a few things but make them fantastic.  When choosing projects, I could steer away from that box of 20 orcs.  Instead, work on the ork warboss, but put a month’s work into it.  Make it competition worthy.   My forces will be small, but it will be obvious I’ve put a lot of effort into them.

Probably, I’ll be doing a combination of these three things in the next couple of years.  One thing is for sure.  I will continue to grow into this hobby.

Posted in Uncategorized | Comments Off on OK. What now? 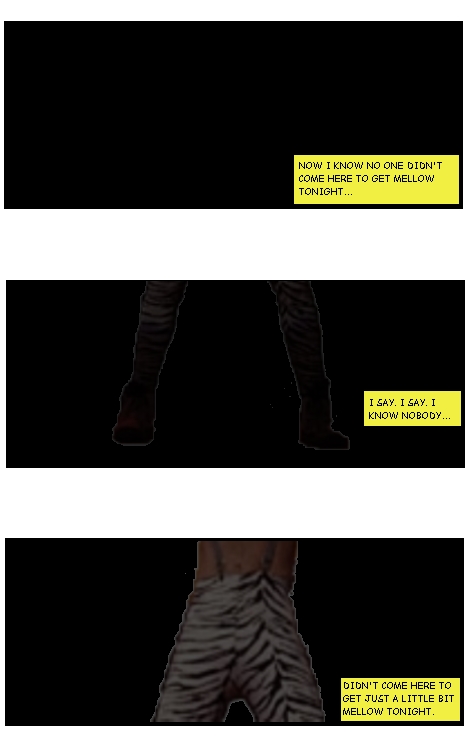 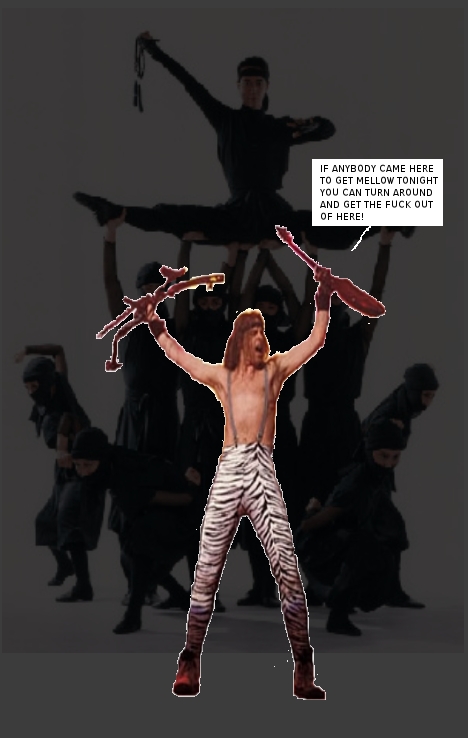 Posted in Uncategorized | Comments Off on Michiganians: Issue 1

Over the Thanksgiving weekend, several of us put together an astonishingly large game of Warhammer.  This game was 10,000 points per side, with well over 1000 models on the table.  Speaking of the table, ours was 14 feet long and even then we barely had room to perform all of our deployments. 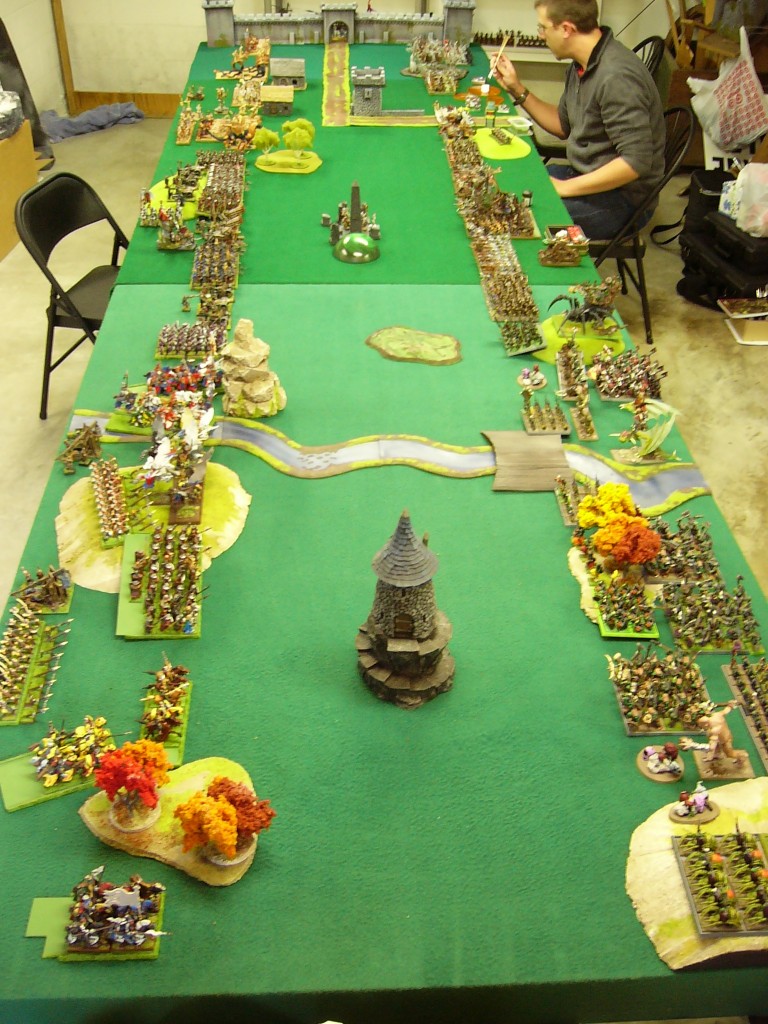 Certainly it was difficult to get everything into one shot.

The sides were Empire, Bretonnia and Tomb Kings vs. Skaven and Orcs.

While there was a scenario and lots of special rules and tons upon tons of combat, I’m just going to post some of the better photos I had taken to help emphasize the shear size of this game. 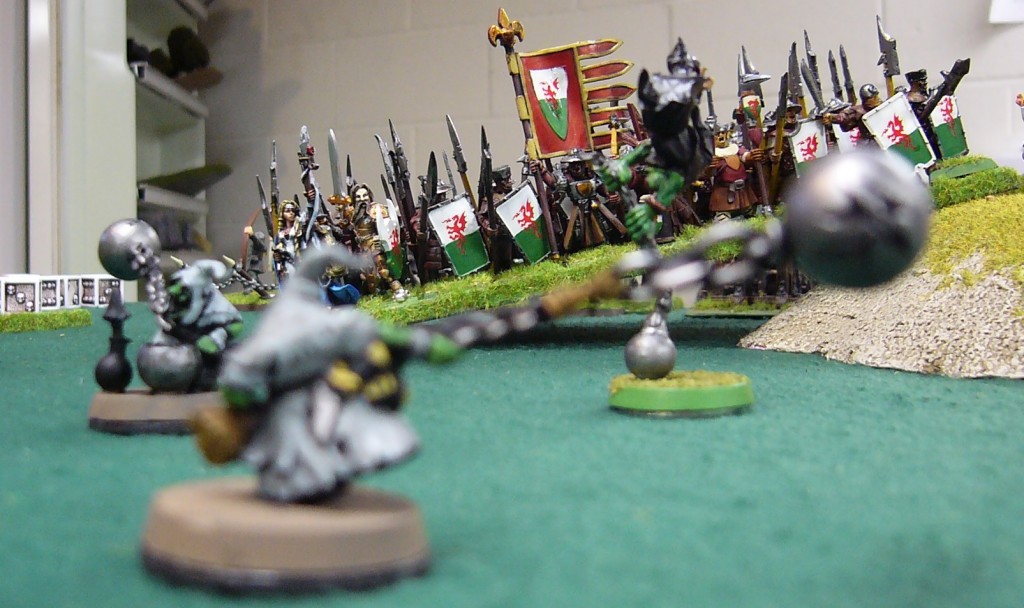 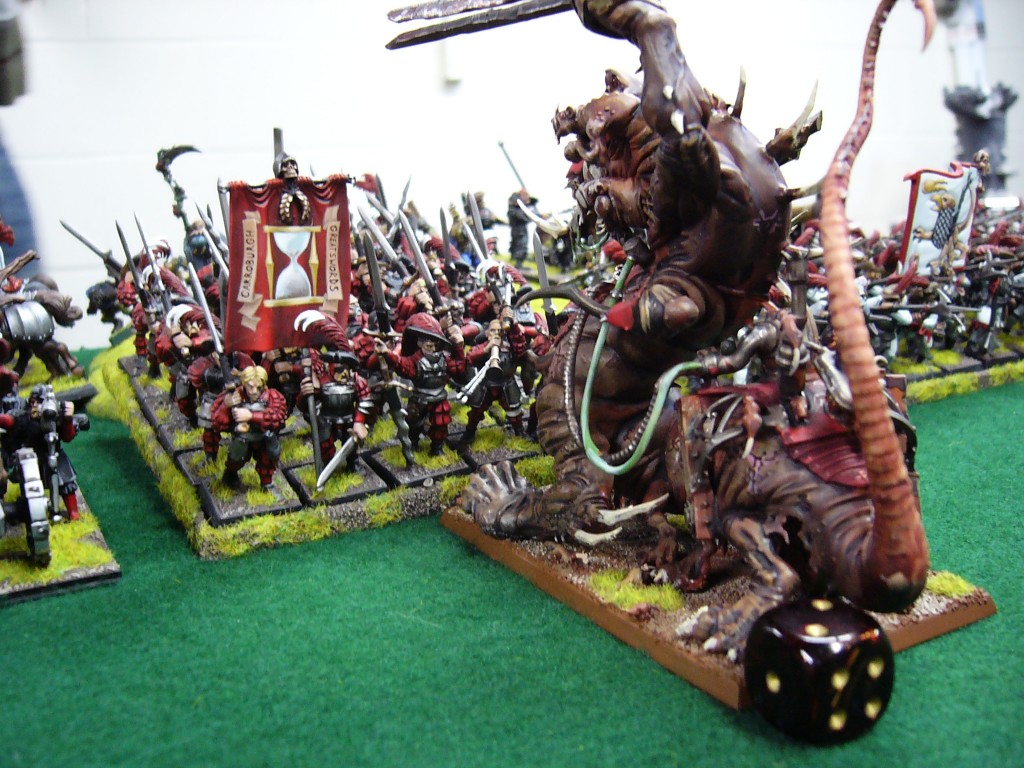 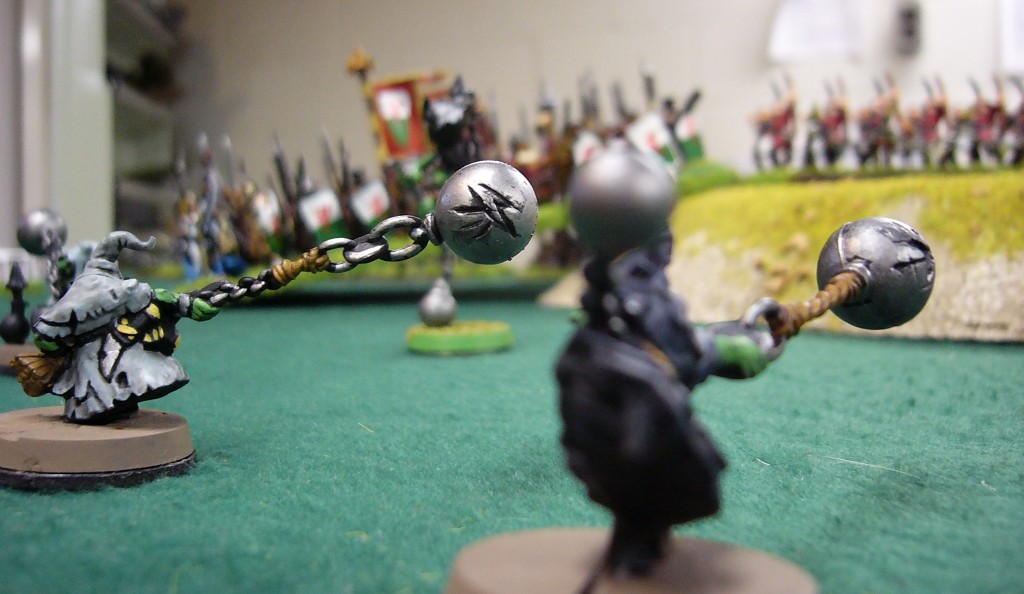 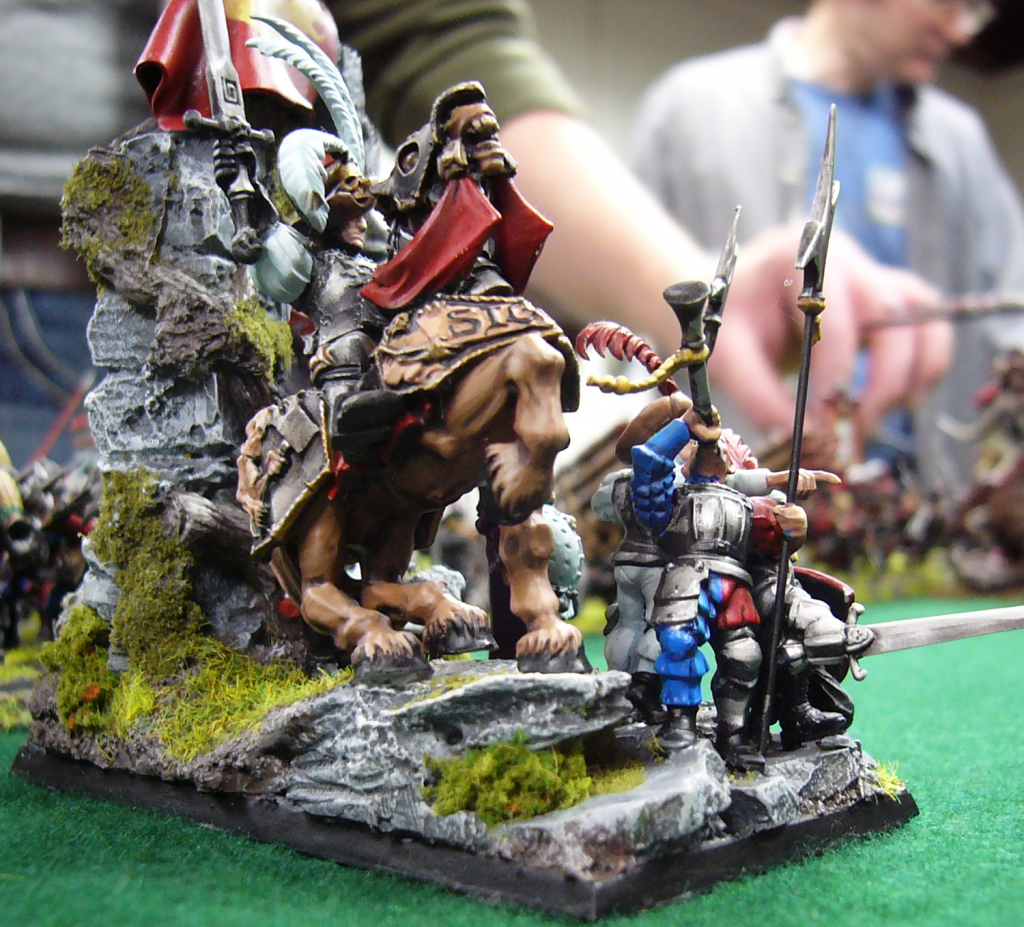 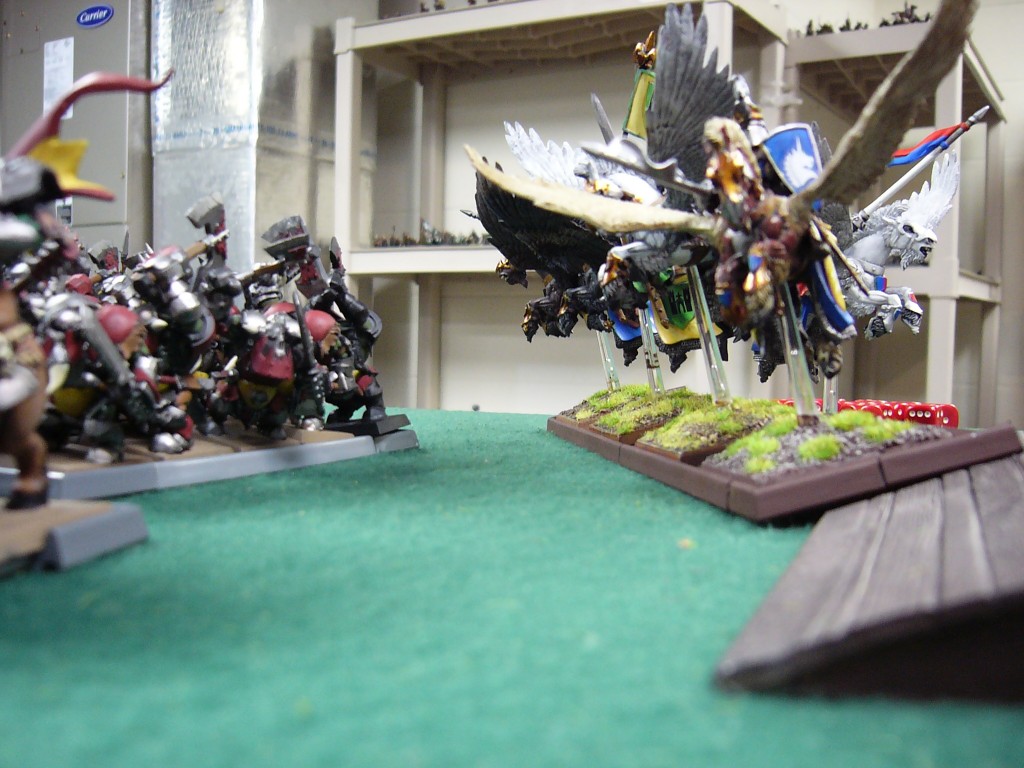 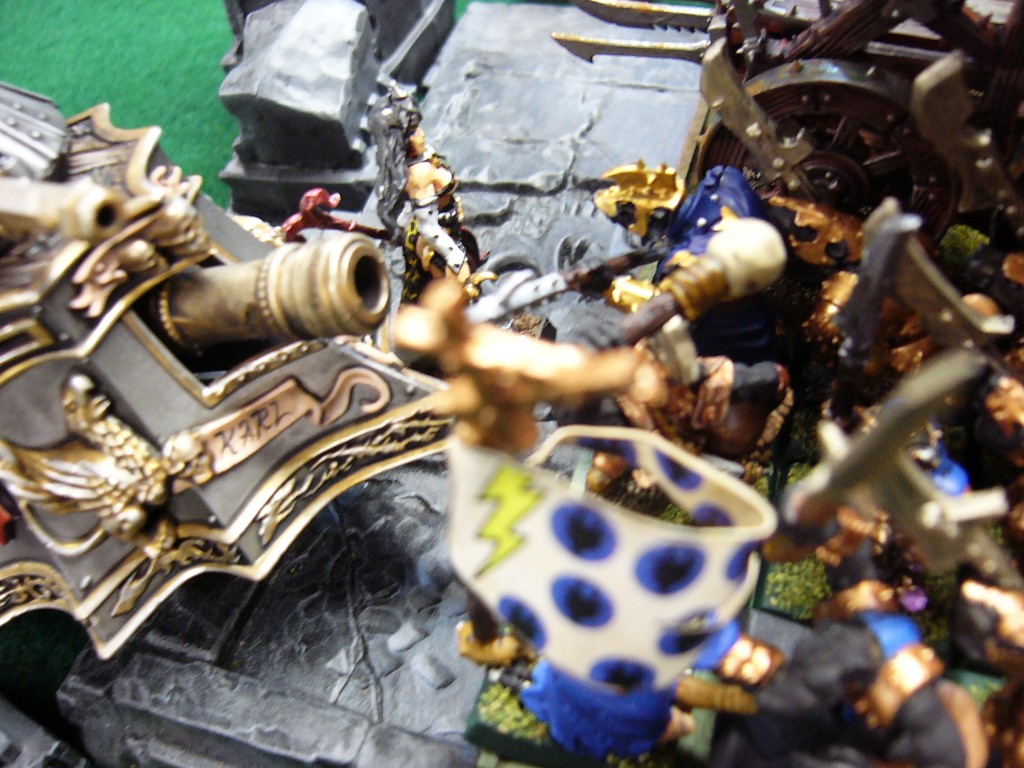 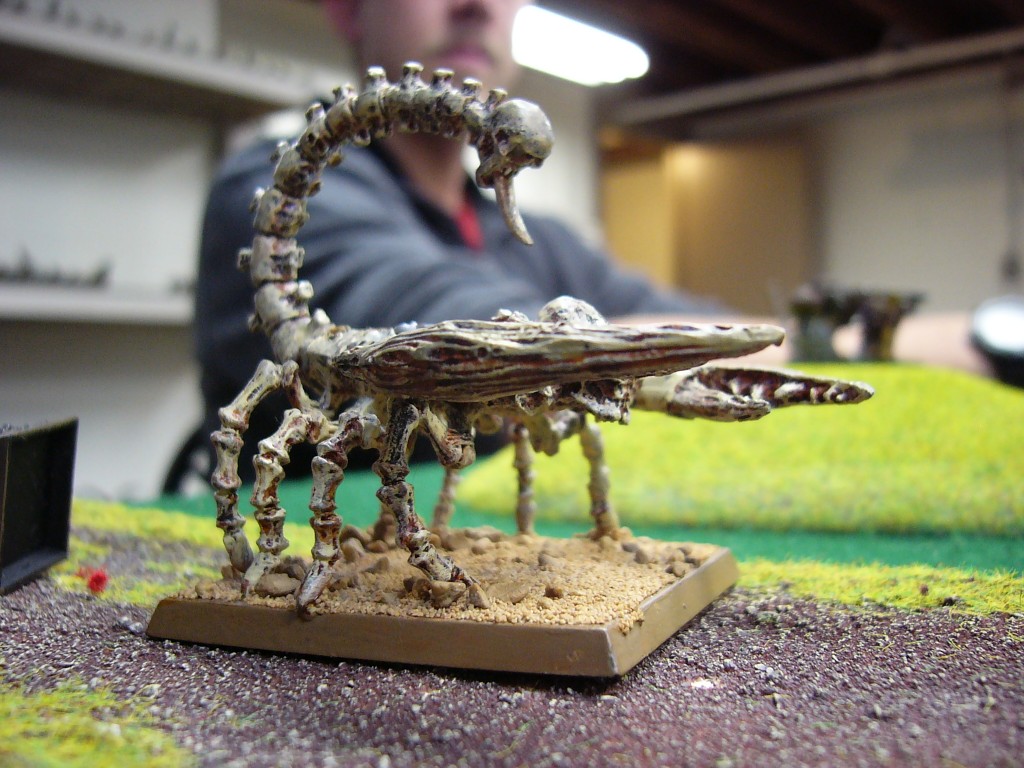 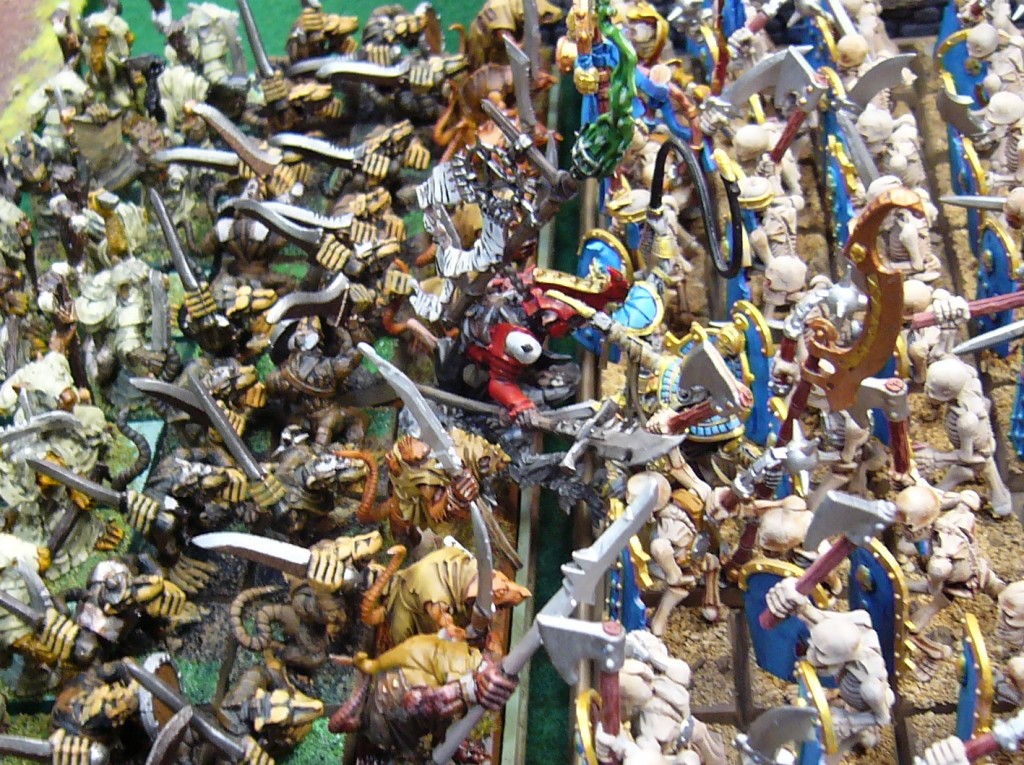 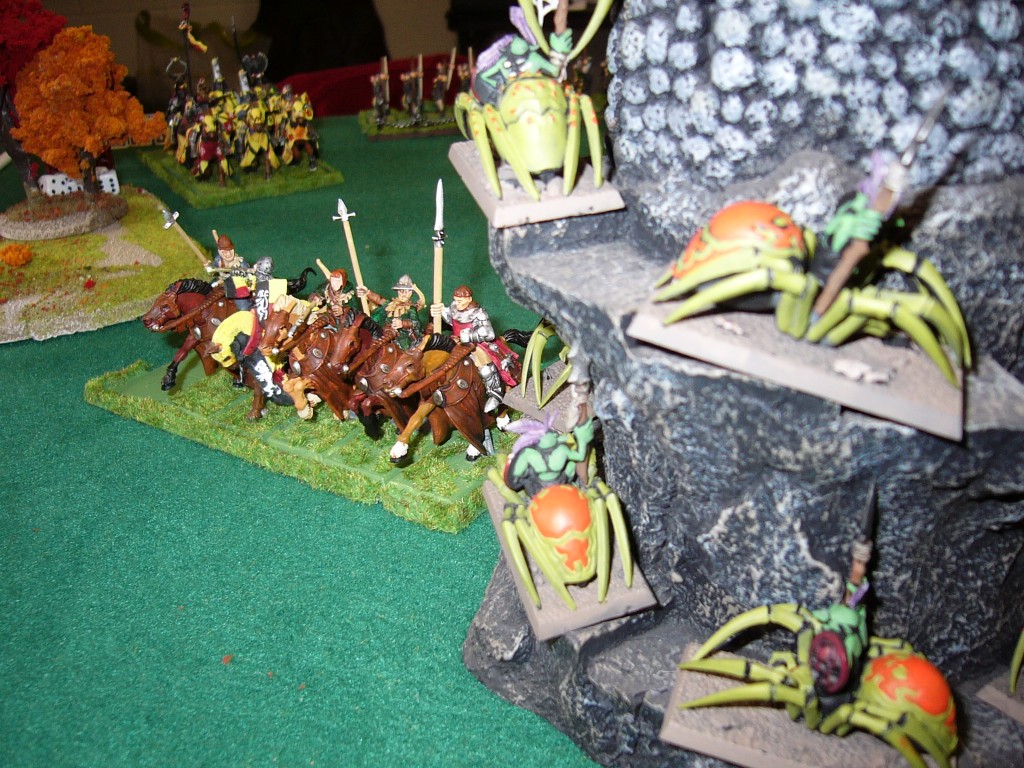 Posted in Uncategorized | Comments Off on Size Matters