Very occasionally, I’ll host a painting day at my place, where I’ll share my minis, paints and tools so that people who might be curious about the hobby get a chance to see what it’s like.  This year I was excited to have 10 people over with a wide range of skills.  Here are a few of the pieces we worked on. 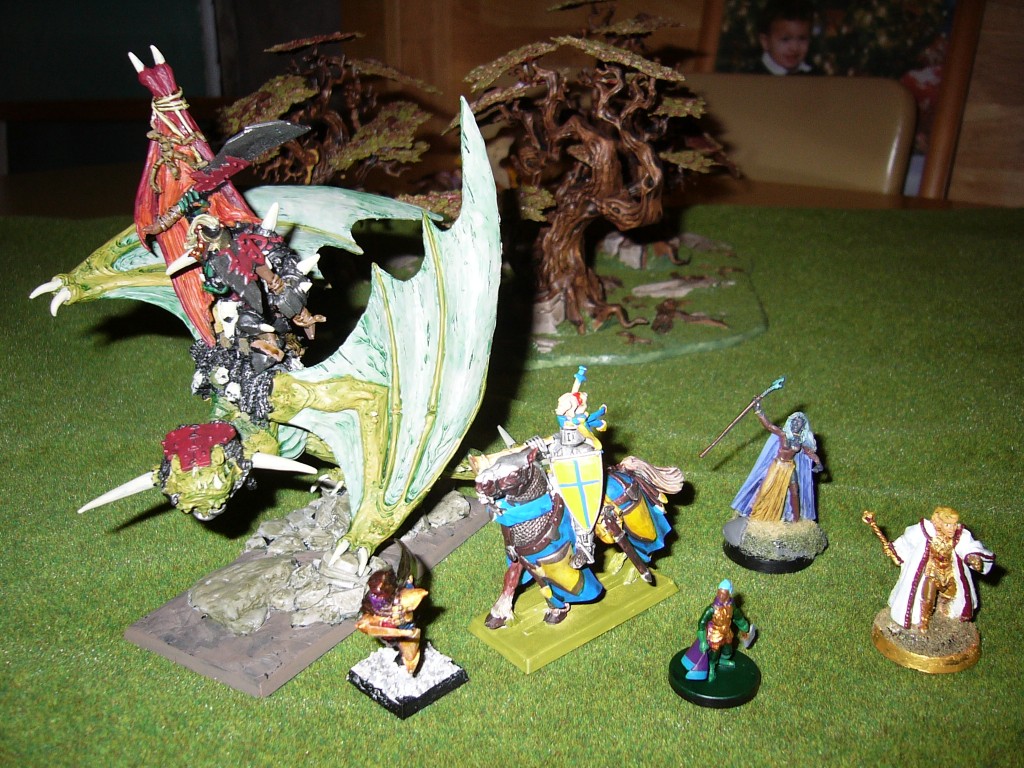 Some of the games represented (not all pictured).  D&D, Dreadfleet, Battletech, Warhammer Fantasy and 40K.

Posted in Uncategorized | Comments Off on Watching Paint Dry

While spending the week recovering from dental surgery I used the time to power through a large handful of projects that have been accumulating on my bench.

My biggest accomplishment was slogging through an entire Light Panzer Company.  23 tanks ready to meet my Polish cavalry! 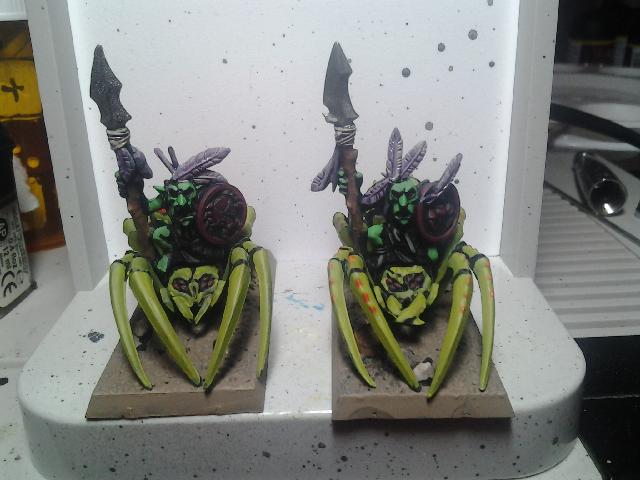 A few more pieces of my 5000 point Orcs and Goblins list. 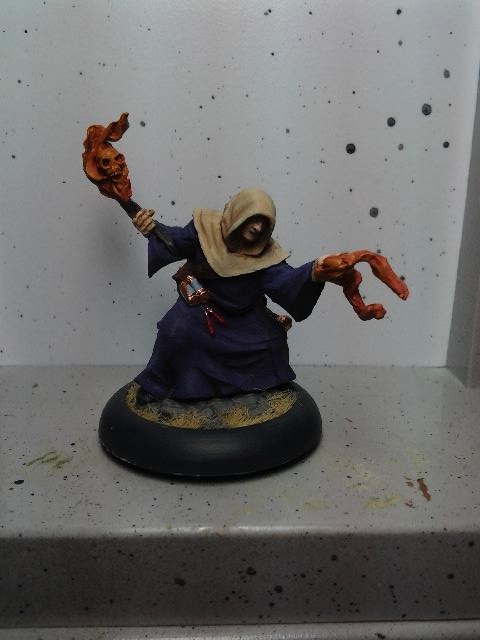 I probably spent the most time on this fellow here.  This is my character for the D&D game I play with several pals once a month.  I pushed myself to learn some new shading techniques I’ve been picking up from the Jen Haley video tutorial.  I wish I had taken a better photo to show off, but his cloak, hood and face are done completely without washes, but using a more advanced belending technique.  I can see now how using blending creates a much more smooth and subtle shading than just washing and highlighting.  I doubt I’ll ever use the technique across an entire army, but it’s pretty nice for individual pieces. 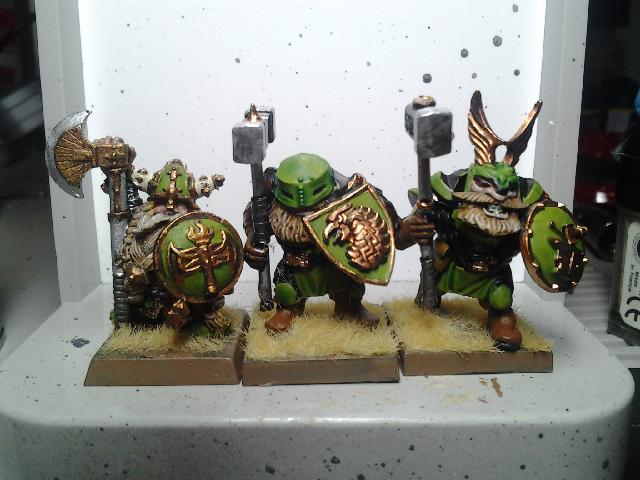 Finally, I painted up five of my GW/Mantic hybrids as Longbeard Rangers.  Here there are next to one of the GW models I currently use.  I was hoping that using the same palet would allow the two models to work together well in the same unit, but the size difference is a little disappointing.  Still, they’re there if I need them, and who’s going to fault a dwarf army for being lumpy looking?

Posted in Uncategorized | Comments Off on Off the Bench

On the Bench: Panzers, Giants and Dwarfs 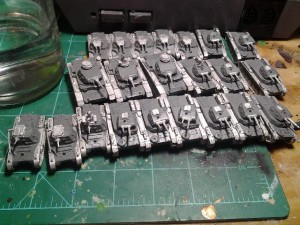 It took me about six hours to go from out of the box to trimmed, washed, scored and assembled.  Now I wait a day for the glue to cure before priming.  I don’t expect the painting to take more than 12 hours all told, considering that they are mostly one color that I can do that with an airbrush.  I intend for this to be my loaner army to help lure people into Flames of War, so I don’t expect to get too hung up on the details.

In the meantime, while waiting for the glue and primer to dry, I threw some paint on my Orcs & Goblins Giant, which finally pushes me to a full 2000 point list.  Not a good list, but 2000 points regardless, so I can say I have 2 fully painted armies. 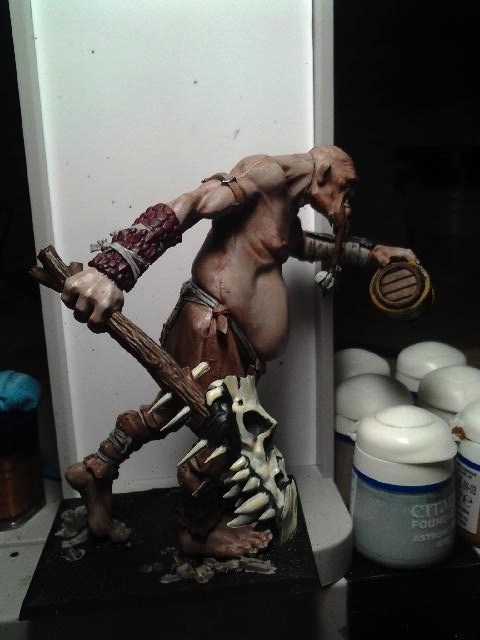 After this, I just reached my hand into my pile of projects and pulled out a box of 20 Mantic dwarfs that I’ve been sitting on for a year now.  I got these from Bartertown and was not happy with the fact that they had already been primed with a gloss paint and were missing several pieces.  I had wrote them off, but I got ambitious and started digging in the bits box.  I’ve got a start on turning these guys into some respectable long beard rangers.

Posted in Uncategorized | Tagged dwarfs, flames of war, orcs and goblins, warhammer | Comments Off on On the Bench: Panzers, Giants and Dwarfs

On the Bench: Flames of War

Yesterday, I finished up the last of my Dystopian Wars Prussian cruisers: 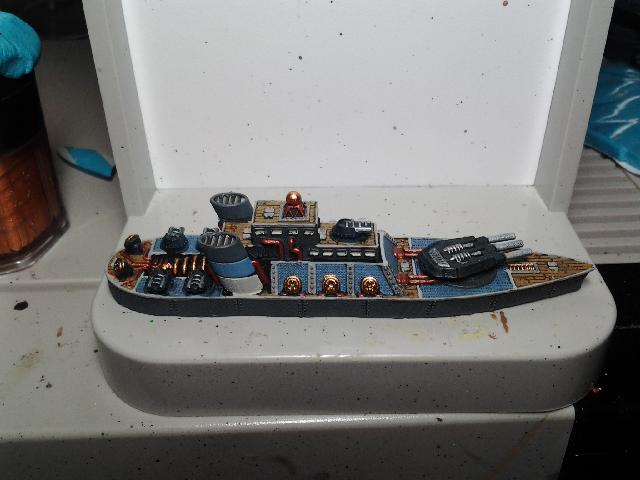 Today, I started on this little project. 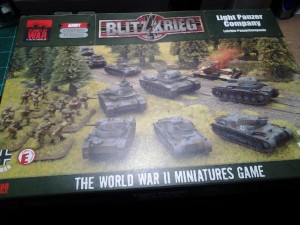 I’m slowly working my way towards being able to supply an entire demo game of Germany vs. Poland.  This is the beginning of Phase 2.  Painting up a German Light Tank Company
First, after cracking open the box, here is the intimidating sight. 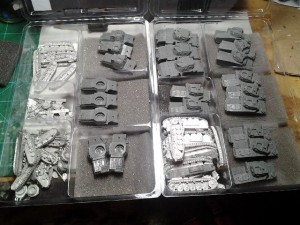 First step is identifying what is what. 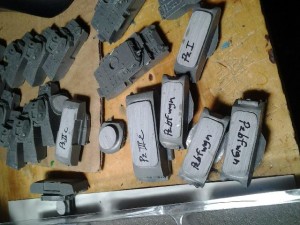 Once everything is identified and labeled, I move forward with scoring the large connection points.  Here is a comparison of scored vs. unscored. 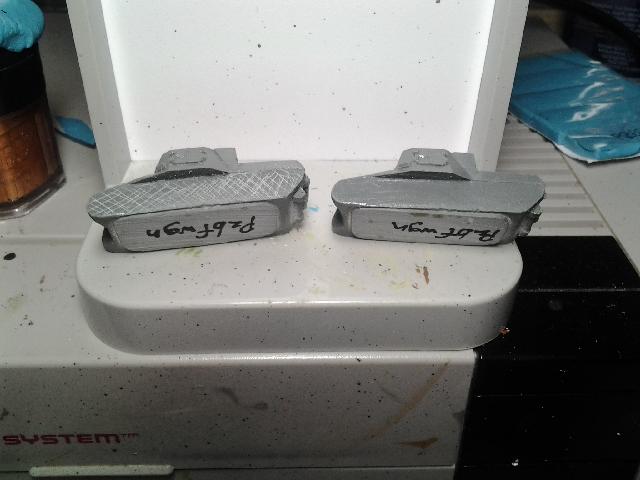 While it seems like a small thing, scoring the connection points helps so much.  It increases the amount of surface area that you glue can connect to, thus strengthening the bond.  This is particularly important with the tank treads, which seem to love popping off.
Finally, here’s where I left the bench last night, with the pictured models scored and ready for cleaning. 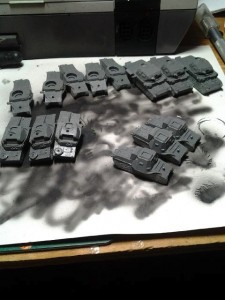 Start time: 7:30pm
End time: 8:30pm
Total time this week: 1 hour
Posted in Uncategorized | Comments Off on On the Bench: Flames of War

After a year of sitting on my shelves, my Menoth and Khador starters are finally finished and will be going for a test run tonight! 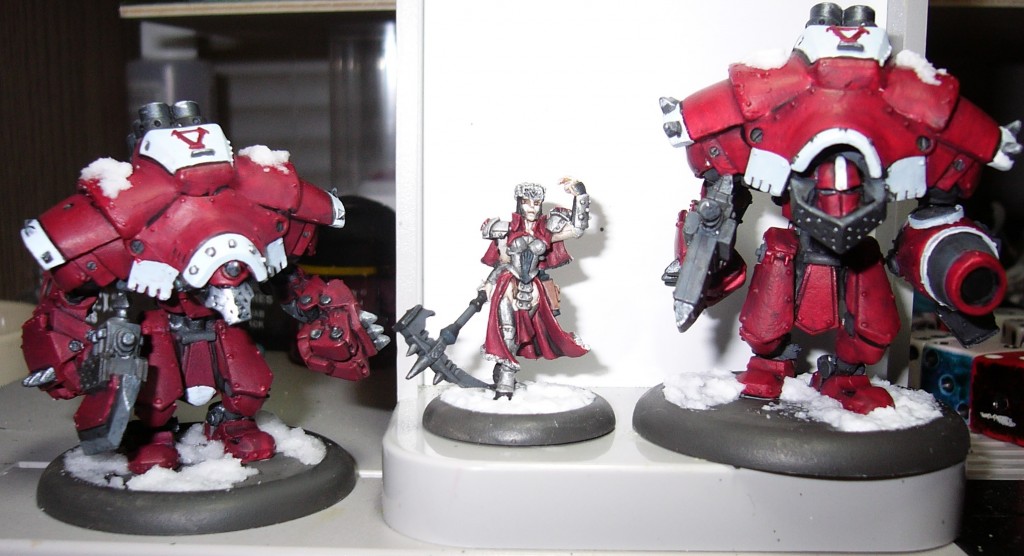 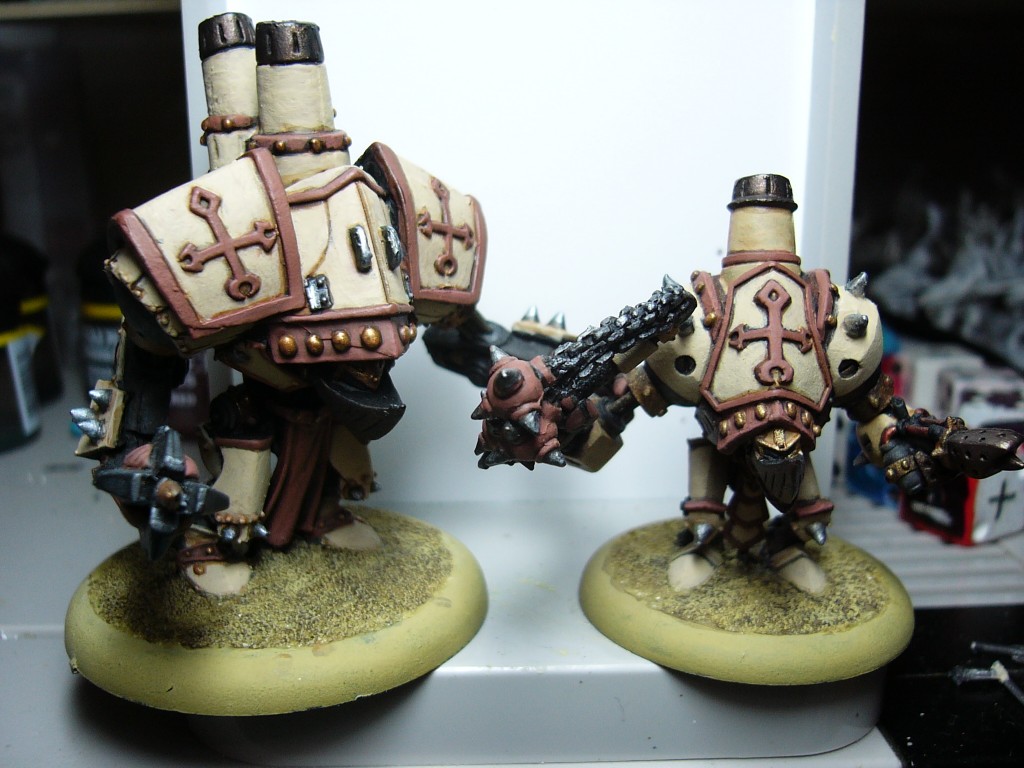 They’re not that pretty, but I’m not sure how much I’m going to invest in this game.  I’m still on the fence about Warmachine.

The Orc and Goblin Challenge 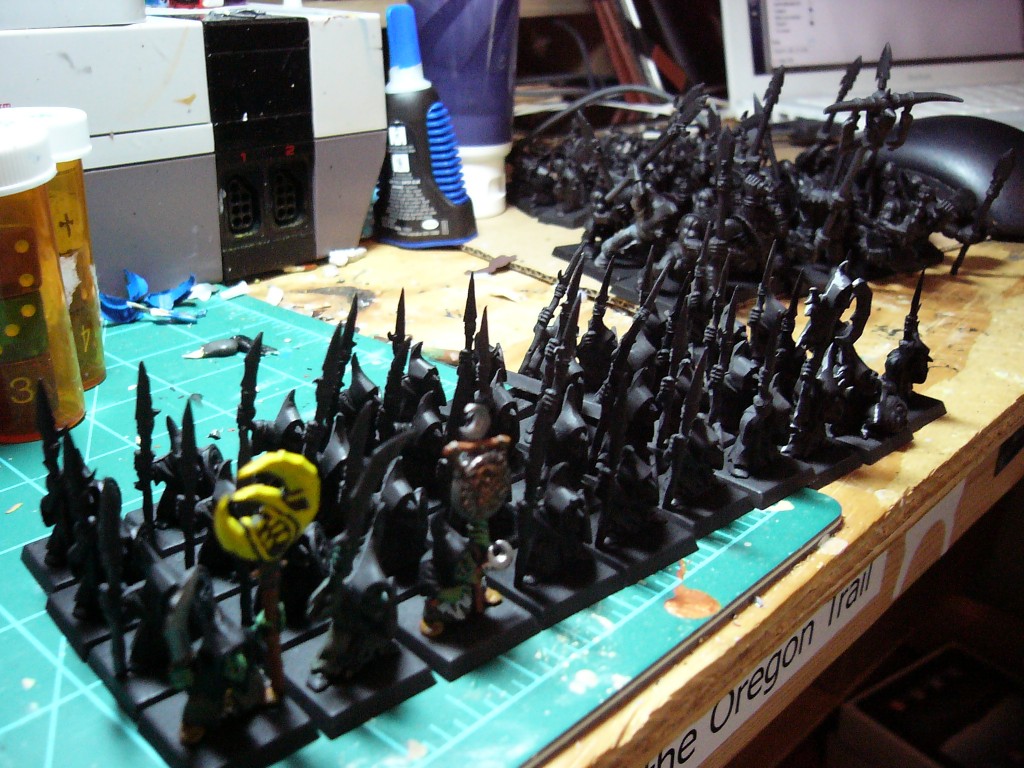 To keep myself from getting out of control on the detail, I’ve limited myself to a palet of no more than 6 colors per model (not including washes and inks).  I’ve spent 4 hours so far and managed to finish 6 of the 15 orcs.

This Sunday, Bruce and I got in a very exciting game of Firestorm Armada.  I’d debated with myself if I wanted to use my Terran or Dindrenzi fleet.  Bruce was fielding his Relthoza, which I’ve lost to with Terrans twice, so I decided to try my luck with Dindrenzi. 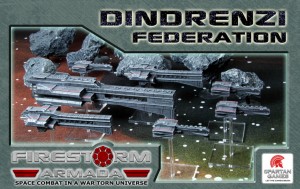 I’ve preferred using Terrans in the past for their flexibility and balance.  Their powerful turrets on their Razorthorn give them the ability to have fairly powerful attacks in any direction, as well as fantastic torpedoes.  The Dindrenzi, by contrast are focused almost completely in one direction.  Their weapons are the most powerful in the game, but they also have the most limited arc of fire.  If a Dindrenzi foe is good at maneuvering, and can keep from spending too much time in front of a Conqueror, they can own the battle.

A large battle has just finished in this sector of space and the victors have left the wreckage of the defeated fleet to the ravages of open space.  The crew of the destroyed ships are scattered along with the stranded crew in their escape pods.  A salvage and rescue team has arrived, but the victorious fleet was waiting for them just out of sensor range.  The trap is sprung and now the rescue team must gather as many of the survivors as possible and get out of there!

The roll-off dictated that I would be the Defender in the scenario.  Knowing that the Dindrenzi specialize in long-mid range sniper style destruction, I deployed the Conqueror in the far corner, so that it would have the maximum number of chances to get off good shots before being surrounded.  This also gave me a defensive advantage, as it would be too risky for the Bruce to try to shunt near my battleship.  Chances are that he would have shunted right off the table. 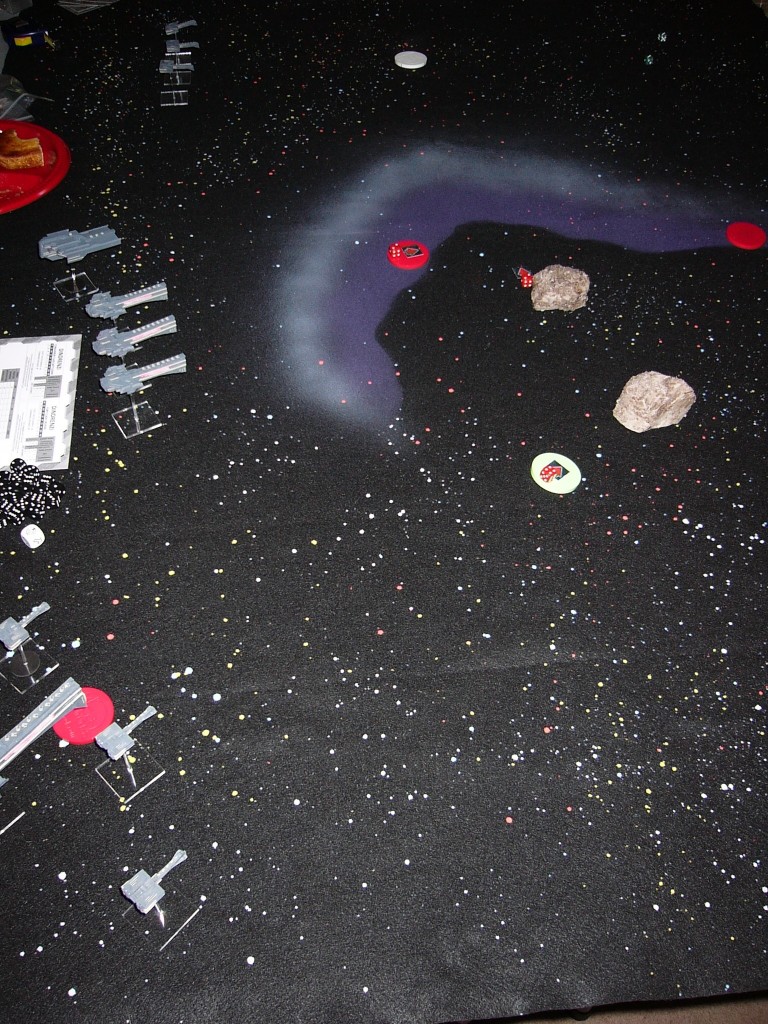 The Relthoza fleet all shunted in safely around the center of the board and we both rushed for the objectives, taking what shots we could.  The early to mid game was dominated by nonsense from my dice.  I was unable to land solid shots with anything but my battleship, while the Relthoza frigates quickly ate up most of my fleet.  Still, the Dindrenzi have superior speed and I was able to use that to gather the more valuable objectives, forcing to Relthoza to destroy my entire fleet if they hoped for victory.

Like most Firestorm Armada games I’ve played, the game came down to two damaged battleships circling each other.  However, the Relthoza found themselves in the following situation:

The Relthoza ships focus almost all of their firepower to starboard and port, while the Dindrenzi are all fixed fore.  One good shot was all I needed to clean up this game.

Of course, the dice decided otherwise, and my Conqueror ended up drifting past, getting set on fire and stuck trying to make a U turn while facing the worst of the Relthoza broadsides.  Rather than risk a complete loss, I took the cowards way out and shunted the Conqueror off the board to give my opponent half-points.  Once victory points were tallied, I managed to squeak a decisive victory. 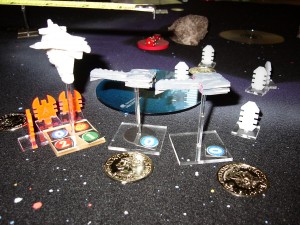 This is the remains of a daring attempt of me trying to perform a boarding assault of a limping Relthoza cruiser.  I had come in with 3 assault wings and two fully loaded frigates.  The cruiser was on fire and had reduced crew and point defense.  But the dice, again, were not with me and I left this battle with all of my assault teams exhausted and 1 crew point remaining on the cruiser.  It broke my cruel little heart. 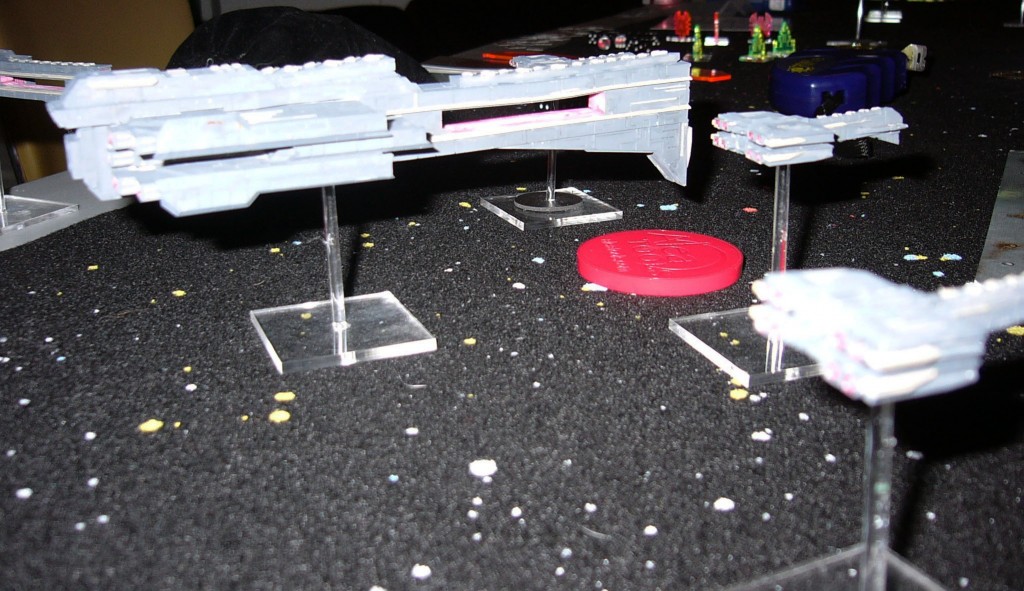 Maybe, just maybe, my life has gotten a bit out of balance.

I’ve been dabbling with Flames of War for a while now, but haven’t committed to any army.  Then, they released Poland. 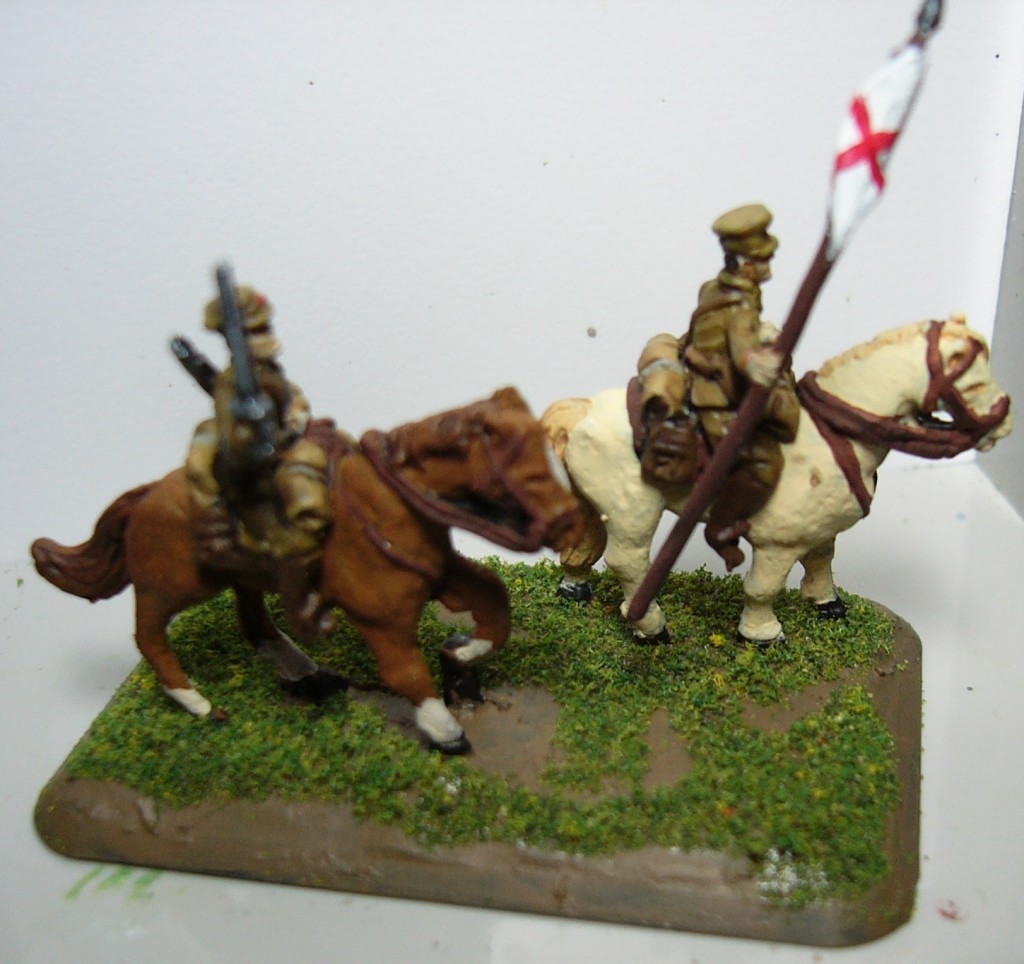 I love the sad but proud image of the Polish cavalry charging into the unstoppable German Blitzkrieg.  This is my first few command elements from my growing Polish Pulk Kawalerii company. 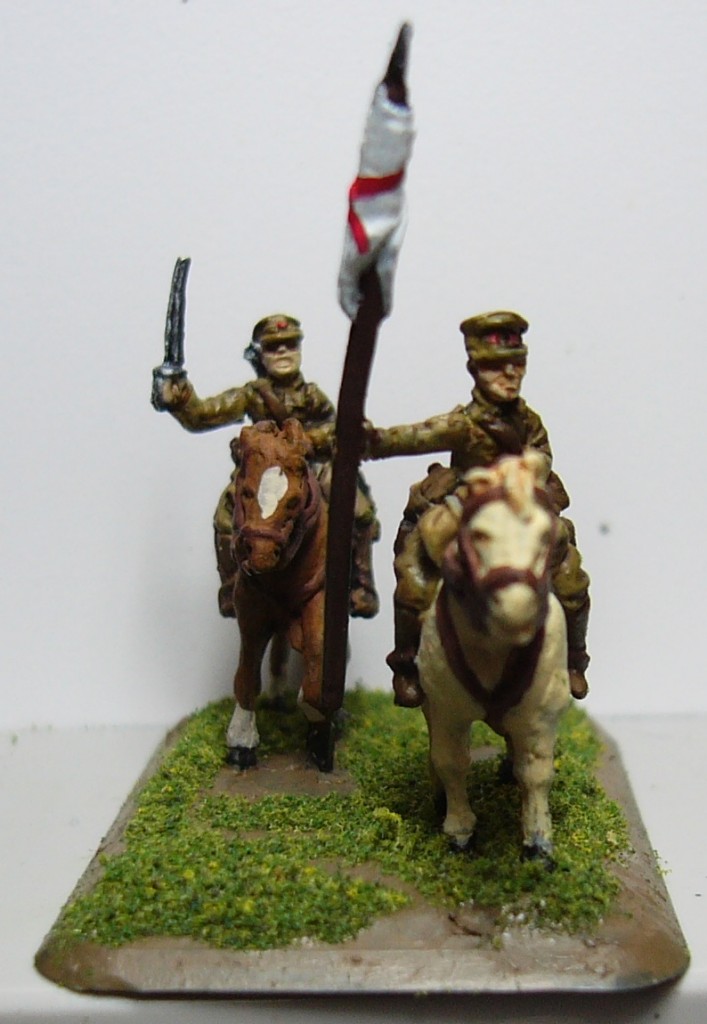 This is my first go at painting an Avatars of War model.  Avatars of War is one of those nice little niche companies that specializes in making alternative models for Warhammer.  I picked up this Dark Elf at Gen Con last year and finally felt confident enough to paint her as my army’s new general. 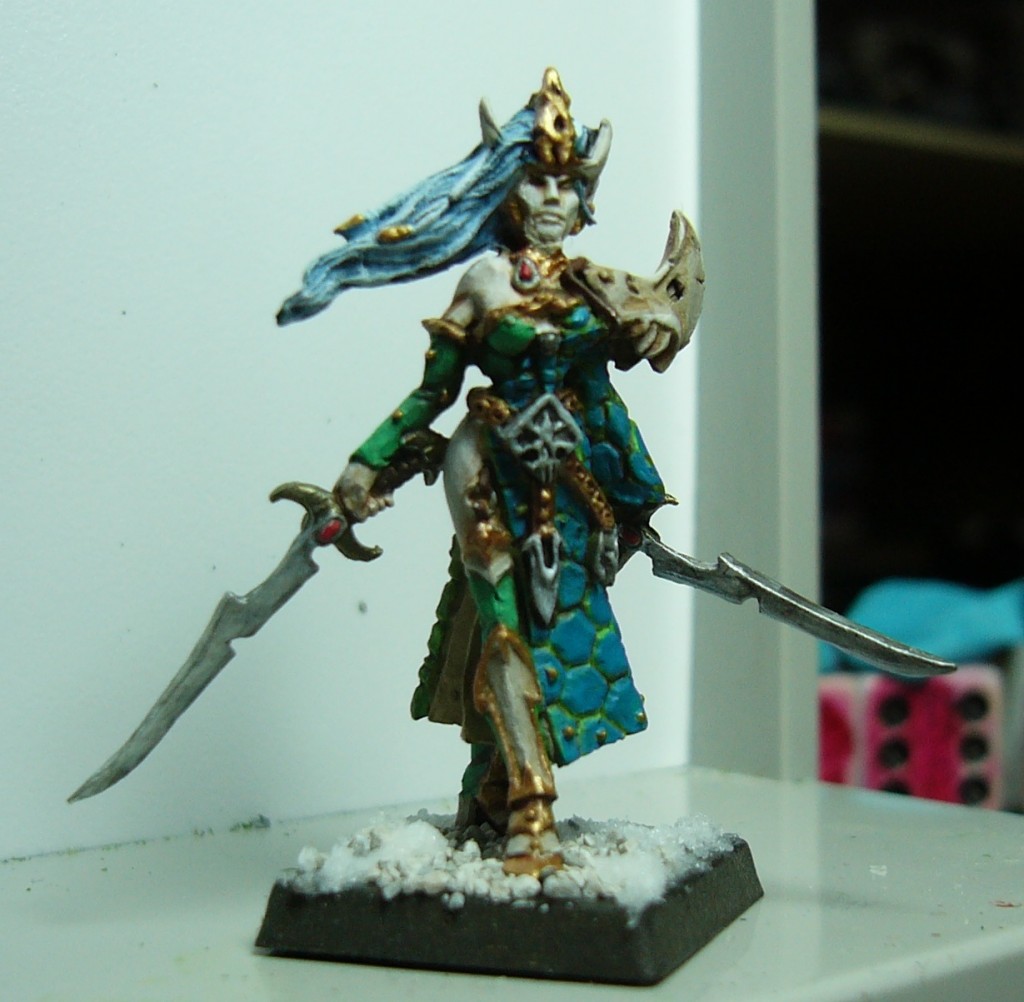 This is likely the pinnacle of my painting skills right now.  Not up to ‘Eavy Metal standards yet, but not bad for a few hours of work.  I’m especially happy with the pallet I’ve chosen for my Dark Elves.  I wanted to be sure that they had a sort of overexposed look.  Most painters choose a suitably wicked looking pallet for dark elves.  Mostly black with deep violet and blues.   I felt that by making the models especially bright, and choosing mostly cool colors, it would make them feel more cold and distant, as is appropriate for an entire race of psychopaths.